God’s wrath at this moment.  However, many of the elements and events surrounding the crucifixion are woven into the design of this window.  The three crosses establish a pattern of verticals and horizontals that carry through the design of the six windows.  The figure of Jesus hanging on the central cross becomes a movement of curving lines which are punctuated with red “jewels” for the wounds.  The colors of Christ are violets, dusty roses, and purples, all signifying His Kingship in spite of His position on the cross as the suffering servant. Above the head of Jesus is the mocking inscription, “This is the King of the Jews,” in this case reading as the abbreviated Latin INRI.  The window is comparatively somber in color to reflect the darkness of the hour with the sun partially obscured as an eclipse.  The movement of lead lines from top to bottom as Jesus gave up His spirit and thereby entered into the tabernacle, the Holy of Holies, as our high priest. 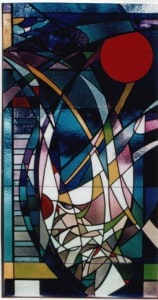 It is evening and the cool colors of this time of the day become soft blues, purples, and greens.  The setting sun is a vibrant red with lead lines flowing down to embrace the cocoon‑like form in the lower half of the window.  On the left side of the window is one part of the cross with a pattern of rectangles intersected by flowing lines to signify the removal by Joseph of Arimathea of the body of Jesus from the cross.  The body was then wrapped in a linen cloth for burial.  Behind the linen wrapped figure, which is dotted with flecks of red to signify His shed blood, is a large blue rectangle, the tomb which was hewn out of rock in the garden where Jesus was laid.

The gospels state that the Sabbath was about to begin and that the burial of Jesus occurred before this holy day of rest.  Scripture does not contain any description that would describe what occurred in the tomb once it was closed and sealed except the passage of time.  Historically, one of the signs for the resurrection is the lily.  The large circle in a rectangle in the center of the window encloses the simplified petals of the Calla lily.  The circle itself is the stone rolled against the entrance to the tomb.  This is a quiet moment.  The focus of the circles draw the eye to the center of the lily where are found warm, vibrant colors to signify the hope of the resurrection.  This is a transitional window which signifies the completion of Jesus’ earthly ministry and the promise of salvation by grace as proclaimed in the New Testament.

The double circle bisecting the horizon line that stems from the first panel is the rising sun, early dawn on the first day of the week.  This is the Christian Sabbath or the Lord’s day.  The lower half of the window is interlaced with descending lead lines and cool colors where the linen wrappings lay.  No figure is represented for the tomb is empty.  Ascending from the lower third of the window is a pair of wing‑like forms of many warm, bright colors, the dazzling apparel of the two men (angels) who appear to the visitors of the empty tomb.  The crisscrossing and intersecting lines lead to the top of the window where they dissect the horizontal bar of light purple that began in the first window on the left, leading the eye beyond the window.  He is risen, Hallelujah!

This is the moment of Jesus Christ’s ascension into Heaven.  The orange circle (sun/son) is 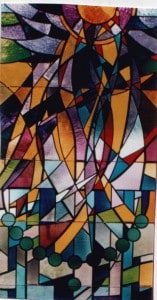 the focus as it bisects the top of the window.  Surrounding the circle are undulating cloud‑like forms that indicate the heavens.  Flowing down from the circle are weaving lines that each lead to a small circle within a semicircle of eleven small circles.  Here are the eleven apostles receiving Christ’s blessing and also the promised power of the Holy Spirit.  Below the eleven small circles is placed a singular circle of identical size and color for Matthias who will soon be numbered with the eleven apostles as the twelfth apostle.  In opposition to the swaying, flowing lead lines are forms in the upper bottom of the window which contain the twelve circles.  Here is the church, the bride of Christ, founded by the apostles.  The colors are brighter, more numerous and joyful in celebration of Christ’s ascension and in anticipation of His return.

The images for this window are drawn from many portions of scripture, especially the

major prophets of the Old Testament and the Book of Revelation in the New Testament. The centerpiece of the window is the glorious red (the color for Christ) circle surrounded by radiating circles of the colors of the rainbow, the colors which surround the throne. Encircling the roundel are seven golden yellow “jewels” which are the seven lamps of fire.  Further out are 24 milky white circles of glass signifying the 24 elders.  Flowing from the base of the roundel is a cascade of lead lines and red, orange, and yellow glass which are not only the train of the Lord’s robe, but also the “river of fire” in Daniel’s vision that flows before the throne.  In the midst of the river of fire is an open book.  The interaction of color, repetition of circles, radiating and flowing forms are all intended to focus attention on the glory of the Lord, who is King of Kings and Lord of Lords.